Worth knowing about displacement sensors with potentiometric technology

The simplest conversion of a longitudinal movement into a proportional electrical quantity can still be performed with potentiometric measuring systems. These are absolute measuring systems with a resolution better than 0.01 mm and the well-known advantage that the signals are immediately displayed again in the correct position if the power supply fails. Our linear potentiometers cover mechanical measuring distances up to 2000 mm.

Whether as probe with spring return, with ball joints to compensate lateral misalignment, as slide-guided version or for installation in hydraulic applications, they all have a very high-quality resistive element made of conductive plastic (exceptions are the oil-filled with wirewound element). And despite the variety and diversity of the products, some demanding applications require sensor adaptation.

We at MEGATRON are your partner for this adaptation process and accompany you during the product selection, up to the end of the life cycle of your application. Particularly with potentiometric sensors, special adaptations of the measuring paths, the assemblies and improvements in component precision are often required, because in demanding special applications such as in medical technology, the standard variants often do not meet all requirements.

Basic questions about linear sensors? Here you will find the answers

The measuring principle of the potentiometer was already described by Johann Christian Poggendorff in 1841 and has been used since the beginning of the use of electricity. A potentiometer has a resistance track on the surface of which a movable sliding contact is guided which taps a voltage potential. This resistance element can be circular or elongated.
However, the term "potentiometer" or "poti" for short is used today in technical practice mostly for angle sensors, i.e. for the round version.

Potentiometric displacement transducers, on the other hand, are sensors used for length measurement. These sensors are therefore more likely to be found under the name "linear potentiometers", or under the more general term "linear displacement transducers", when a resistance value is specified, or when it is obvious that potentiometric technology is involved.
For the operation of such a sensor a power supply is connected to the displacement transducer. A wiper is moved on the resistor track by means of mechanics (probe, slide, depending on the version), whose potential changes due to the displacement: The output voltage at the wiper is proportional to the position of the wiper on the resistor track. The resistor track is made of high-quality conductive plastic, which generates a continuously variable output signal and allows actuation speeds of up to 10 m/sec.

Potentiometric displacement transducers always have three connections in the standard version, e.g. pins A, B and C. The displacement transducer is supplied with a DC voltage between points A and C. As an example, 10 V is assumed here. The connection A is at 0 V, the connection B thus at +10 V. The measurement of the displacement is based on the principle of the voltage divider circuit, i.e. the moving wiper (connection at pin B) has a certain potential relative to the reference point (A), depending on the position of the wiper between the start and end of the resistance track.

For the example shown (simplified):

If the sensors are correctly connected in voltage divider circuitry, the voltage value at point B is independent of the absolute resistance value of the displacement transducer. However, please note here that this illustration is simplified, as different values for electrical and mechanical displacement travel still apply for the operation of the sensor (see mechanical and electrical travel). Furthermore, no sensor works without measurement inaccuracy. The deviation of the measurement result from the ideal straight line is specified by means of linearity specifications.

Please take into account the maximum load capacity of the wiper and the resistance element when connecting. This information can be found in the respective data sheet. A too high current through the wiper leads to the immediate destruction of the wiper and/or the resistor track at the current position of the wiper.
The resistance value and the applied voltage are important for determining the power loss with which the displacement transducer is loaded. Here are some calculations using the example of the MM10 displacement transducer:

The following applies to the power loss:
P = U² / R (power P = voltage U² divided by resistance R)

On the basis of this calculation example it is immediately apparent that at an operating voltage of 20 V the displacement transducer with 1 kΩ cannot be used, because otherwise the power dissipation with which the resistance element is loaded becomes too great.
Please also note to use a very high input resistance when further processing the signal in an electronic system, so that the current via the slider (pin B) is as low as possible. To record the measured values, the voltage difference between pin B and pin A is measured.

For many models, the mechanical travel corresponds to the complete electrical travel. This leaves only two of the three ranges described above. Although this simplifies the consideration, the effective electrical travel must still be adjusted to the application when installing the sensor. Otherwise, the described dead range falsifies the measurement results. Please observe the notes on the data sheets of the model you have selected.

Potentiometric displacement sensors with oil filling are available for applications with special requirements on the durability of the sensor. They are the right choice especially for recording measured values at measuring points in filthy, moist or even corrosive environments (salts, corrosive gases). Applications for these sensors are found in heavy industry such as shipbuilding, mines, steelworks, chemical plants and many more.

Displacement sensor in very robust design with protection class up to IP67, ball joints and front guided push rod for 50 to 750 mm

Potentiometric linear transducer (sensor foil system) in open and flat design with a space-saving slider construction for 50 up to 500 mm strokes. 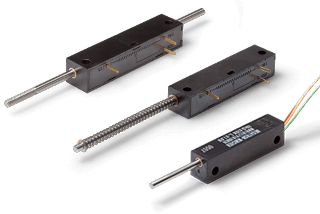 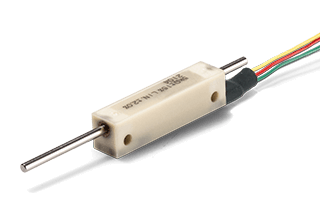 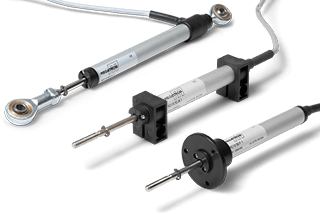 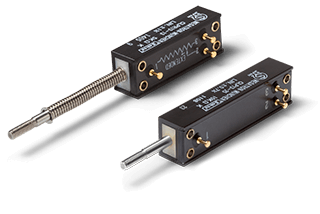 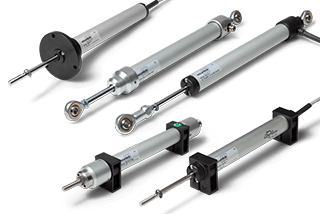 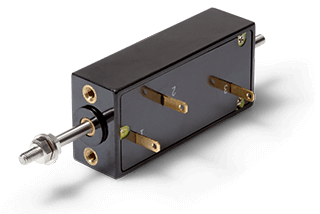 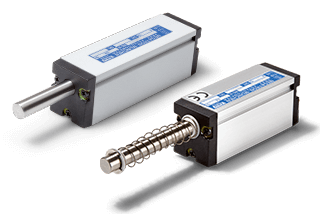 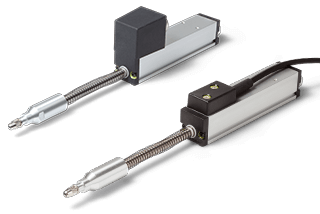 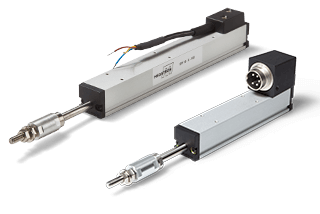 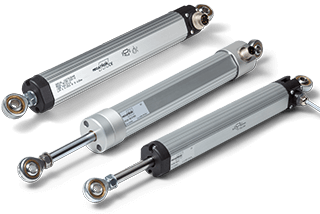 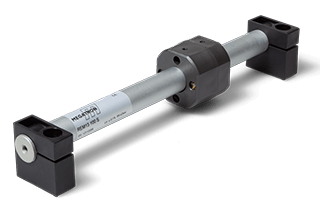 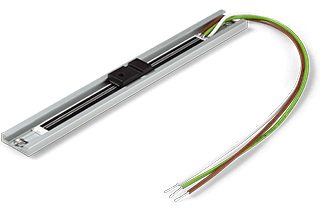 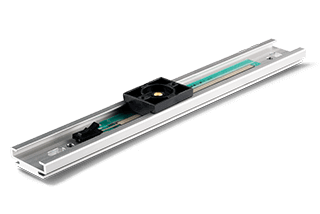 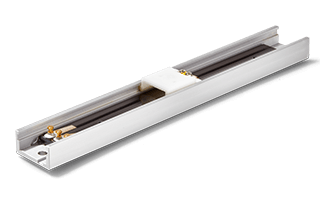 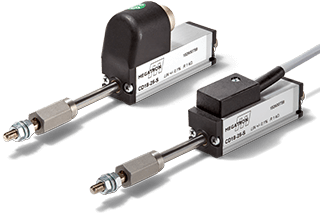 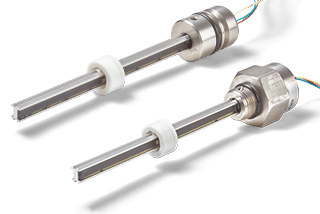 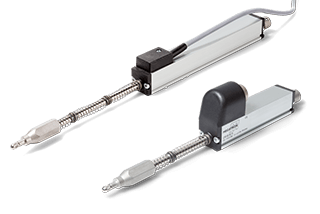 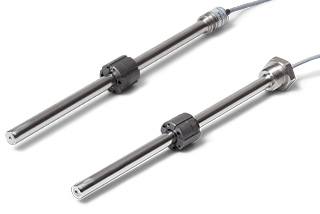 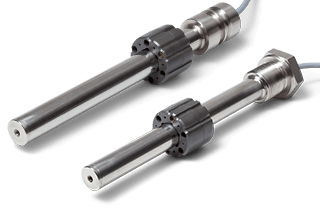 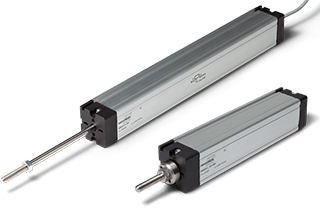 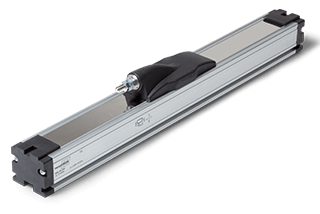 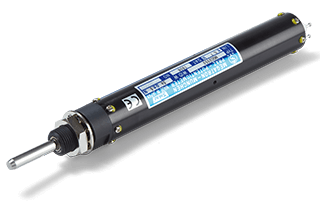 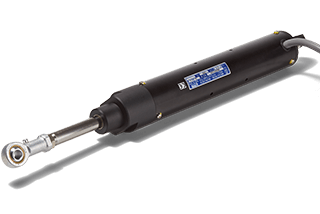