The electronics specialist MEGATRON has added two force sensors the KMB51 and KMB76 to its range, which are suitable for absorbing forces in production as well as in monitoring or testing systems of up to 220 kN. The sensors are robust and durable even under harsh conditions.

The force sensor KMB51 has a nominal force of up to 110 kN, the KMB76 up to 220 kN. Both have a nominal measuring range of ≤0.15 mm with a relative deviation of the zero signal of max. 0.1 % of the nominal force and can be safely used in a nominal temperature range of up to +70 °C. The KMB51 and KMB76 have a nominal measuring range of up to 110 kN and 220 kN respectively. The two compact force sensors meet the requirements of protection class IP64 and have a stainless steel measuring body that can withstand harsh conditions. In addition, a measuring protocol is enclosed with the force sensors in which the exact characteristic values for the installation are listed.

On request, MEGATRON can customize the force sensors for small quantities to suit the respective application. Services include the modification of cables with plugs as well as detailed advice. On request, MEGATRON also supplies load cells for other forces on a project-by-project basis and responds specifically to customer requirements. In addition to the two force sensors KMB51 and KMB76, MEGATRON offers a large selection of bending beams, S-Beams and other bottom load cells. A suitable measuring amplifier of the IMA2 DMS series complements the portfolio. 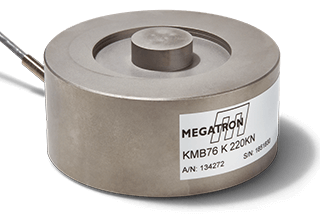