The electronics specialist MEGATRON has added the load cells of the KMC series to its product range. The so-called "pancakes" can measure forces of up to 500 kN and can be quickly integrated into the application. They are ideally suited for use in presses, testing machines, truck scales as well as in large hopper and funnel weighers.

The force sensors of the KMC series can absorb forces up to 500 kN and have a non-linearity < 0.02 percent. The enclosed measurement report provides the user with the exact characteristic values for installation. All sensors have a strain gauge full bridge (Wheatstone) and offer a high measuring sensitivity. Depending on the sensor type, the force is applied via a metric thread or a through hole with/without groove. The version with groove is particularly suitable for applications where a form-fit installation of the sensor is required. The electrical connection is made via a permanently integrated cable.

Despite their high measuring range of up to 500 kN, the deformation bodies have compact dimensions and a low overall height. They meet the requirements of protection class IP66, have a stainless steel measuring body and can be used safely in a nominal temperature range of up to -20 to +70 °C.

On request, MEGATRON will customize the force sensors for the respective application, even in small quantities. In addition to the production of special variants with individual force ranges, the services also include the modification of cables with connectors and detailed advice. MEGATRON also supplies load cells for other forces on request and deals with customer requirements. In addition to the force sensors of the KMC series, MEGATRON offers a large selection of shear beams, S-Beams and further button load cells. A matching measuring amplifier of the IMA2 strain gauge series completes the portfolio. 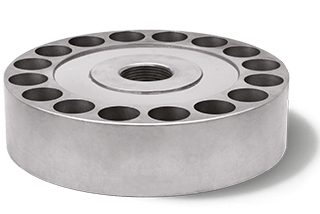