The MEGATRON Elektronik GmbH & Co. KG celebrates its 60th anniversary this year. Starting out as a sales company, the company has consistently specialized in the development of customized product solutions for industrial and medical technology applications in the field of sensor technology over the past decades. Today, accurately fitting sensors, joysticks and precision components from MEGATRON can be found in thousands of design-ins from renowned customers all over the world.

A unique selling point of the company is the customer-specific adaptation of its products to the customer's application, even for small quantities. The best possible technical and economic result for the application is achieved in close cooperation with the customer. The company relies on in-house development and production as well as on a reliable network of partners that has been tried and tested over many years. A wide range of standard articles completes the portfolio.

With the distribution of electronic and electromechanical precision components, Gerda and Peter Vizenetz founded MEGATRON Elektronik GmbH & Co in the 1960s. The success story began with the design-in of a trimmer potentiometer at SIEMENS. In the following years, the product range grew rapidly and after a short time, the company building in Putzbrunn already had to be extended. With the ELPAC brand, a wide range of electronic housings and components for printed circuit boards was additionally opened in 1979 for the steadily growing clientele. Since the 1980s, the company has been meeting international demands through cooperation with worldwide sales partners.

In the years 2010 to 2013, the founders handed over the company to the next generation. Corinna Vizenetz and Thomas Volkwein took over the main shares and management of the company, with Thomas Volkwein becoming responsible for the operative business.

Already in the 2000s, MEGATRON started its own development and production for "Made in Germany" products. In the meantime, this product range has played a significant role in the growth of the company and has been consistently expanded. In addition, the establishment of a modern digital infrastructure has improved customer relations and optimized services.

In recent years, MEGATRON has brought numerous innovative product series onto the market, including the SpaceMouse® module for 3D control, the modular Hall encoder series ETx with numerous electronic, software and mechanical options and the optical-electronic incremental encoders of the SPM series. "The next step will be to greatly optimize and expand our portfolio of magnetic encoders," reports managing director Thomas Volkwein.
The digital infrastructure in development and production is also currently being further expanded in order to be able to respond even more individually to customer requirements in the future. All in all, MEGATRON sees itself in an excellent position for the future. 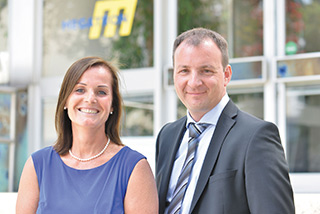