The KM801 / KT803 and KM701 / KT703 force sensors from MEGATRON are ideally suited in applications for measuring switching and actuating forces. Since the sensors work according to the bending beam principle and are equipped with strain gauge full bridges, they provide highly accurate measurement results. Some versions also have a measuring amplifier and are nevertheless compact.

KM801 as well as KM701 can be combined with the external amplifier IMA2 DMS from MEGATRON. These amplifiers in DIN rail housing contain the complete signal processing electronics for a force sensor with strain gauge full bridge. With the KM801 as well as with the KM701, the force introduction is perpendicular to the force transducer axis. Both series are supplied with a test protocol containing the most important characteristic values.

The force sensors of the KT803 and KT703 series are identical in construction to the KM801 and KM701 variants. In the KT series, however, a digital measuring amplifier is already integrated in the force transducer to amplify the very small signal voltage and provide analogue output signals (0...10 V, 4...20 mA @24 VSUP). Despite the integrated amplifier, the sensors remain compact. Depending on the application, the sensors of the KT series can be calibrated for tension or compression.

Thanks to the bending beam principle, all force sensors are largely insensitive to a shift in the vertical force introduction. Since they have strain gauge full bridges, they can compensate signal changes caused by temperature influences. The force sensors can be conveniently mounted on any stable structure via two screws.

Among other things, force sensors from MEGATRON measure forces in the crimping process of cable assembly, in assembly processes of industrial manufacturing, in medical devices (e.g. in positioning systems) and in fitness equipment (optimization of strength training). If users do not find what they are looking for in the standard variants, MEGATRON will customize its sensors on request, even from small quantities. 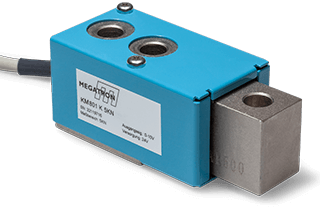